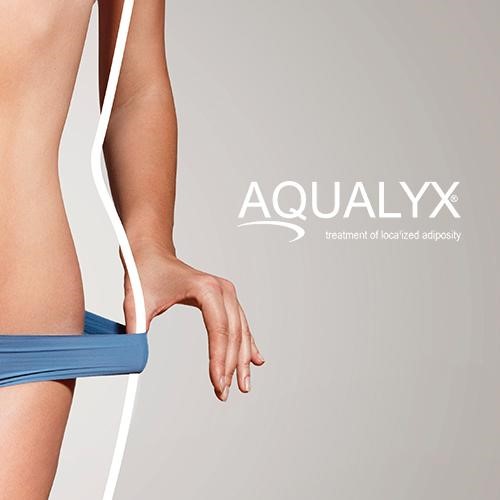 Aqualyx injections have long been the gold standard for dealing with unwanted localized fat deposits due to their effectiveness and safety.

Aqualyx liposuction is a unique method for effective and safe correction of localized fat deposits. Aqualyx was developed by the Spanish plastic surgeon, Professor Pasquale Motolese. Since 2009, after 7 years of clinical research, Aqualyx is ​​the world standard for non-surgical, namely, therapeutic correction of local fat deposits in areas such as:

The active ingredient of the intralipotherapy drug is sodium salt of bile (deoxycholic) acid. This substance is constantly present in the body; it is produced by the liver. The drug is 100% biocompatible and cannot be rejected by the body. The lipolysis process is as close to natural as possible.

Intralipotherapy does not damage the tissues surrounding the problem area, since the drug has a targeted effect. When it enters the problem area, the active components of the drug are distributed in the adipose tissue. They destroy the membranes of fat cells, along with the increase in the outflow of fluid from the adipose tissue. Then the split lipids with active substances are excreted through the lymphatic system.

Intralipotherapy requires that the fat fold is 1.5 cm thick. If the thickness is less, deoxycholate can damage nearby tissues. In one procedure, it is possible to administer no more than 40 ml (5 bottles) of the drug. This volume is sufficient to eliminate fat deposits even in the most voluminous areas, for example, simultaneously on the stomach and on the thighs.

Due to the slow release of active ingredients and the gradual evacuation of fat from the body, the procedure does not harm the kidneys and liver.

Aqualyx is a real alternative to liposuction! The drug does not replace liposuction, it is much softer, but unlike surgery, it has a number of advantages:

Intralipotherapy with Aqualyx is ​​indicated for localized fat deposits, when other methods are ineffective or undesirable. The procedure is used in the presence of difficult to work out areas, as well as irregularities and errors after surgical liposuction. This method is also used to eliminate lipomas.

Recovery after the Procedure

Lipolytic Aqualyx does not begin to act immediately, but gradually disintegrates. After the procedure, you can immediately return to your daily routine. There may be slight itching and burning at the injection sites, but they pass quickly. These are desirable side effects that indicate the effectiveness of the drug.

Redness and slight swelling may be visible over the next few days. The skin will be slightly painful and tender – this also indicates the work of the drug to burn your fat.

During the rehabilitation period, it is necessary:

On the 5-7th day after aqualyx liposuction, any lymphatic drainage procedure should be done in a clinic, for example, LPG. Buy Aqualyx online, because this method is based on the use of a special apparatus that pinches the skin, accelerating the blood flow in the affected area. As a result of such manipulation, the lipolytic is more likely to be absorbed, and the fat is quickly excreted from the body after splitting.

Proteins: The Essential Basis of Life